In the Fall of 1992 a small group of people met to discuss their shared dream of a library for the Lindale community. They formed the Friends of the Lindale Library, held fund-raisers, involved the community and spent countless hours working to reach their goal. Lindale's first library opened in December of 1993 for 20 hours a week with a children's section only. The library quickly expanded its services and outgrew its first home in a 2,000 square foot storefront in downtown Lindale.

In those early days, due to lack of space a number of programs had to be discontinued.  To address that predicament, a building fund was initiated.  Eventually, membership in the North East Texas Library System allowed for applications for grants and, with years of fundraisers, local donation and much work by volunteers, the library moved into its current 10,000 square foot building in 2002, debt free. 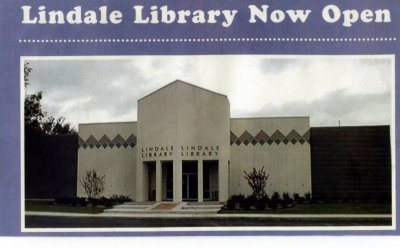 Many of the library programs which had been discontinued in the original library due to lack of space (summer reading program, English as a second language (ESL) classes, storytime, and others) were reinstated and continue through today with many new programs added. Current statistics include: 20,000 library cards issued, 14 computers available for public use, 5,100 patron visits per month, 7,500 books checked out per month, and 2,000 ebooks accessed.

The Lindale Library is not a city-owned entity.  Throughout its existence, the Lindale Library has been privately owned and operated by a non-profit board.   Friends of the Library (mentioned above), also assists in generating funds for the library operation.  Approximately 25% of the library’s budget comes from an annual contribution from the City of Lindale.

With the remainder of the library’s budget coming from donations and grants, it is a continuing struggle to cover operating costs. No federal, state or county funds are received by the Library. Private grants received help cover the expense of programs, equipment and infrequently salaries, but cannot be applied to general operating costs. The Board of Directors and Friends of the Library strive to generate the balance through fund raising events and, with the support of local service organizations, businesses and patrons, strive to find the funds necessary to operate the library in a manner that continues to provide quality services to the community.

In 2014, the struggle reached a critical point and the library was within weeks of having to close its doors. Due to an outpouring of interest and support from local patrons, businesses, service organizations, children and the generosity of Rusty and Teresa Braziel, who have strong ties to Lindale, funding and a plan to put the library on solid financial ground was provided. Lindale Library was renamed the Lillie Russell Memorial Library in honor of Mr. Braziel's grandmother who contributed to the community as a teacher, school board trustee, and community leader. 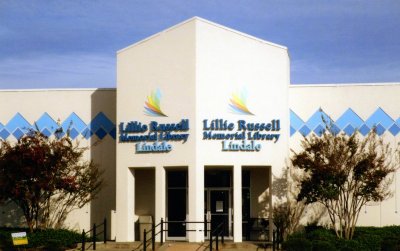 For the fourth year the library has made the Library Journal's Star Libraries list, one of only eleven in the state of Texas in 2015. Lillie Russell Memorial library employs a director and several part-time employees and continues to be supported by many volunteers, without whom the library could not be maintained. A more complete history of the library and the many, many people who made this wonderful institution possible is available in scrapbooks found in the research section of the library.

As we continue to work to keep the library a vital part of the community, we invite you to become part of this process by adding your time, donations and services.